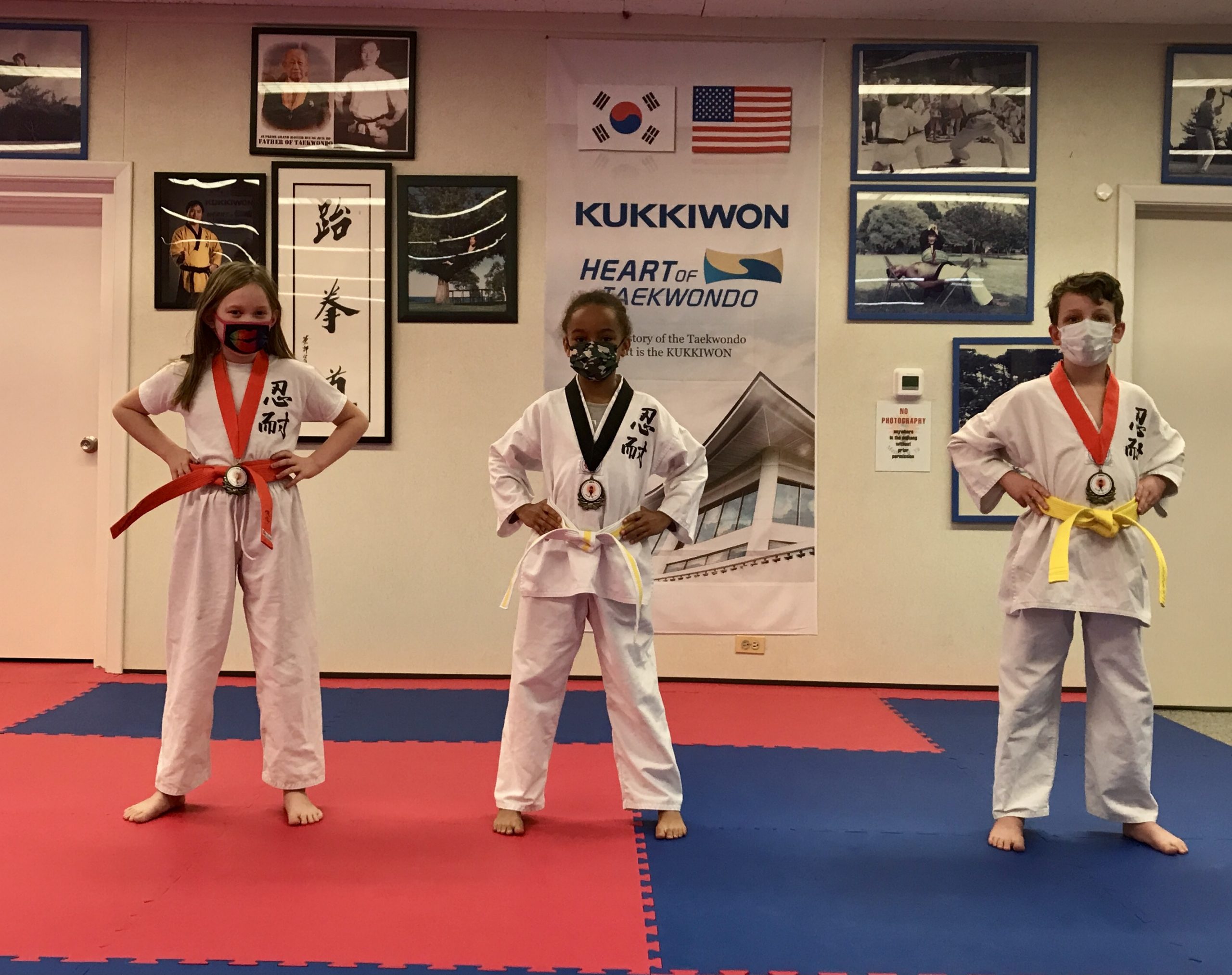 The belt system of martial arts is a tradition that has roots back to the 19th century when judo was created by Dr. Jigoro Kano. Since then, it has been adopted by many different disciplines, including taekwondo, karate, aikido and more. The colored belts represent achievement of certain levels of rank. Each student stripes his or her own belt, so students can easily see their progress over time. Since the belt system is meant to be self-paced, it is important for both students and teachers to set goals and track progress often. The good news is that with every accomplishment your confidence grows, motivating you to work harder for even higher goals!

Students studying martial arts must pass through several ranks before attaining the highest one. As a student progresses through colored belts, they are taught ethics, discipline, etiquette and respect, in addition to physical training and defense skills.  The belt system is more than just achieving a certain level of skill; it also teaches self discipline and helps set goals for improving. These colorful belts signify the growth the martial arts students make both inwardly and outwardly.

A martial artist who wears the impressive black belt is recognized for having mastered the discipline of martial arts, oftentimes advancing to higher degrees of blackbelt, offering a lifetime of learning. However, several other color belts are earned before finally donning the black belt. Each belt color has a significance, and here’s what the rainbow of colors means.

During the initial phase of study, martial arts students wear the white belt. White is a color that symbolizes beginnings, so it is no wonder that students starting out in training wear the white belt. The student can expect to encounter different challenges as he advances to the next belt rank.  White traditionally means “empty” or “moo”, “blank”, signifying the beginners mind and openness to the new experience.  White Belt is meant to bring a lightness to learning, as there are literally no expectations of the White Belt to “know” anything about martial arts.

Enthusiastic students may feel apprehensive to wear the first belt, but even black belts started out wearing the white belt. Brand-new martial arts students who train diligently can expect to progress to the next belt rank within an average time span of 3 months.

The yellow belt holds significance in the martial arts, too. Yellow is a color of hope, just as the beams of yellow sunlight give hope to each new dawn. The yellow belt demonstrates that the student is in the learning phase. One will wear the belt for 3 months before advancing.

As the yellow belt signifies hope, the orange belt suggests growing strength. Like the sun that becomes increasingly orange as it advances higher into the sky, the orange belt means the martial arts student has mastered the discipline’s 10 self-defense moves. The student wears the belt for another 3 months.

Like the blue sky that gives light to all growing matter, the blue belt is given to students who learn additional skills and show that they are allowing their minds and bodies to develop. Self-defense techniques and sparring are performed.

Green is the color of growth, and the martial arts student wearing the green belt demonstrates that he is learning and refining his techniques. Striking, grappling, and wrestling skills are introduced, which can require extensive self-discipline. 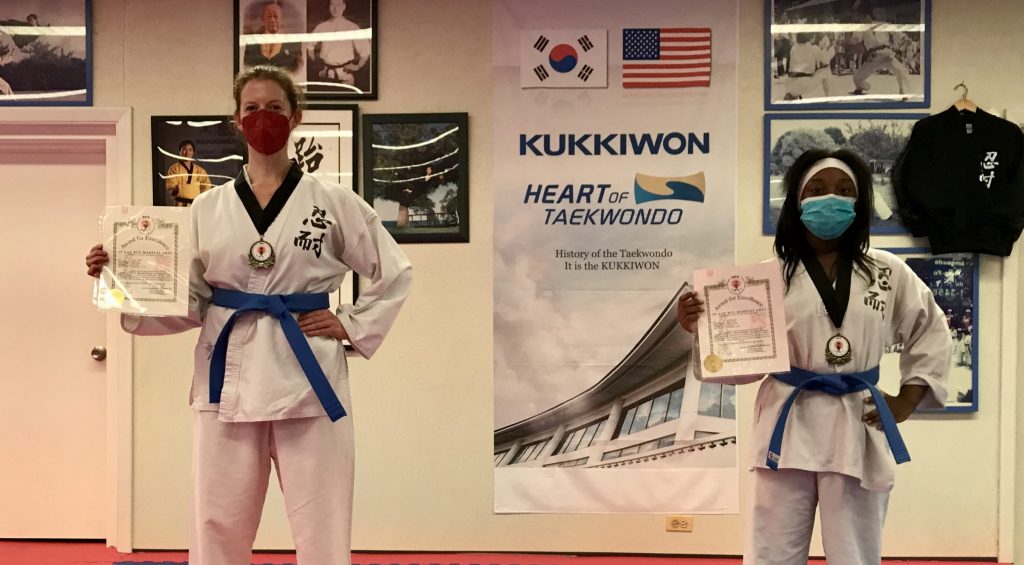 The color of dawn, purple represents the transition to the next level of study. The purple belt, therefore, is worn by students in the process of learning advanced footwork. Training emphasizes that self-defense is for self-protection instead of ego enhancement.

The fruits of the martial art’s student are realized when he earns the next belt. The brown belt is a representation of the mature seed that is ready for harvest. Advanced students wear the brown belt as they continue to sharpen technique.

The strength of the sun is represented by the color red—which is also the color of danger. Likewise, a martial arts student wearing the red belt is becoming increasingly knowledgeable in his discipline, so much so that his skills are considered dangerous. Advancement takes time at this level!

The black belt is what all martial arts students ultimately strive to attain. The color black represents the darkness beyond the sun. The black belt martial artist is on the path toward discovering a deeper understanding of the physical and mental teachings of martial arts.  We believe the achievement of a BlackBelt is the start of a “New Beginning”.

The martial artist who proudly wears the black belt demonstrates they are committed to defending themself honorably and strives to maintain discipline within their life. They are also focused and respectful of self and others.  The goal of the black belt martial artist is to become well-rounded.

Martial arts practitioners who attain the highly desirable black belt go on to teach other students. A step above Black Belt earns them the title of assistant instructor. Again, earning the black belt does not mean the end of the martial arts journey. Rather, it is the start of a new one.

Upon earning the first black belt, the martial artist must pass through 10 levels to earn the final belt. The first five levels of each black belt (or dan) are accomplished through continual training. Practitioners may practice for 20 or more years before they reach the level of 5th Dan, Master.

Black belt levels 6-9 involve the continued practice of martial arts as well as its tenets, including humility, charity, high moral character, and sacrifice for rightful causes. It can take 40 or more years of training to reach ninth dan black belt. Achieving this level is a noteworthy lifetime achievement. 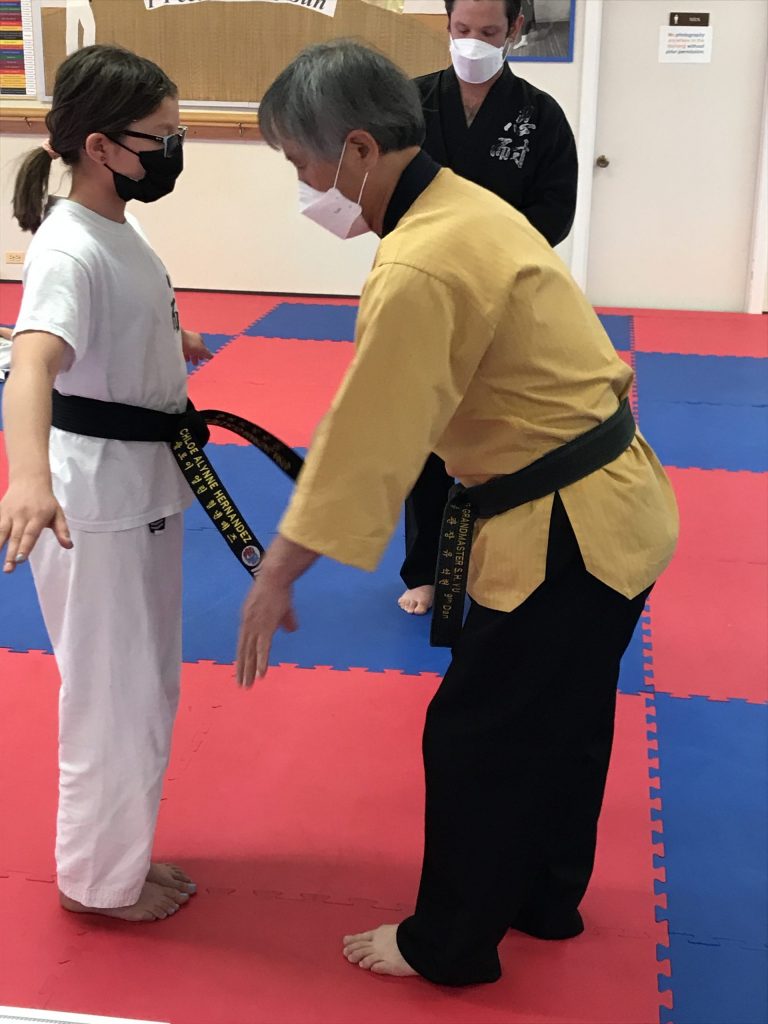 Learning martial arts from Sr. GrandMaster Yu, a 9th-Dan World-Class, Internationally Recognized GrandMaster is what every student at Master S.H. Yu Martial Arts will receive. We offer martial arts lessons for every age group, from children to teens and adults. Young students have the opportunity to realize their potential in our programs.

Our classes are based on the traditional martial arts, including Karate, Judo, Hapkido, Tae Kwon Do, Kung Fu, and ancient artistic weaponry, in eluding Kumdo (or Kumdo), the Art of the Sword. Students who wish to hone a specific skill are encouraged to utilize our private martial arts lessons, which are tailored to the student’s training objectives.

Students who receive training at Master S.H. Yu Martial Arts not only excel in the martial arts, but improve their mind, spirit, and body. We also offer a 12-week self-defense class, which involves lessons in Hapkido, Karate, Tae Kwon Do, Kung Fu, and Judo.

Start your journey in the martial arts at Master S.H. Yu Martial Arts. Our world-class instructors help students develop their skills and advance to the next belt level. We offer regular testing opportunities every 3 months in which students are invited to step forward to advance their rank.  Individuals and families in Oak Park, Illinois, are welcomed to visit our facility and sign up for a life-changing Martial arts class.

Today we gather with our Martial Arts Family: teachers, parents, students and friends, to celebrate…

Everyone knows that martial arts can provide many physical benefits like physical fitness, improved flexibility,…