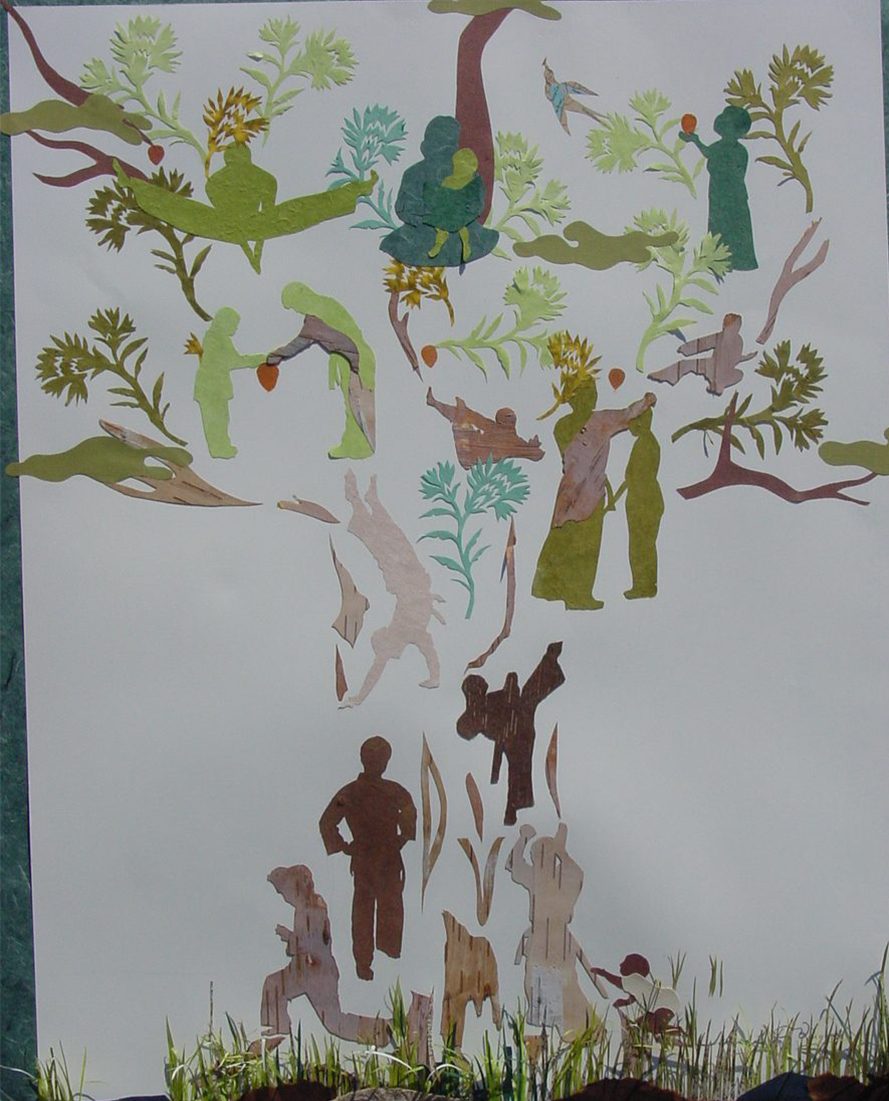 Questions, we get so many questions about the different styles of martial arts!  There are many reasons to study martial arts and there are several benefits from physical training to improved discipline and mental sharpness. It has proven effective in managing many physical & mental afflictions, from childhood asthma, attention disorders, stress and anxiety.

Martial arts have been around for thousands of years and many types of martial arts have emerged throughout history with different styles of movement and fighting. With so many martial arts styles out there, it is easy to get confused by the terminology and disciplines. To ease your confusion, we offer our own brief description of each martial art’s discipline, origins, philosophy, and style. 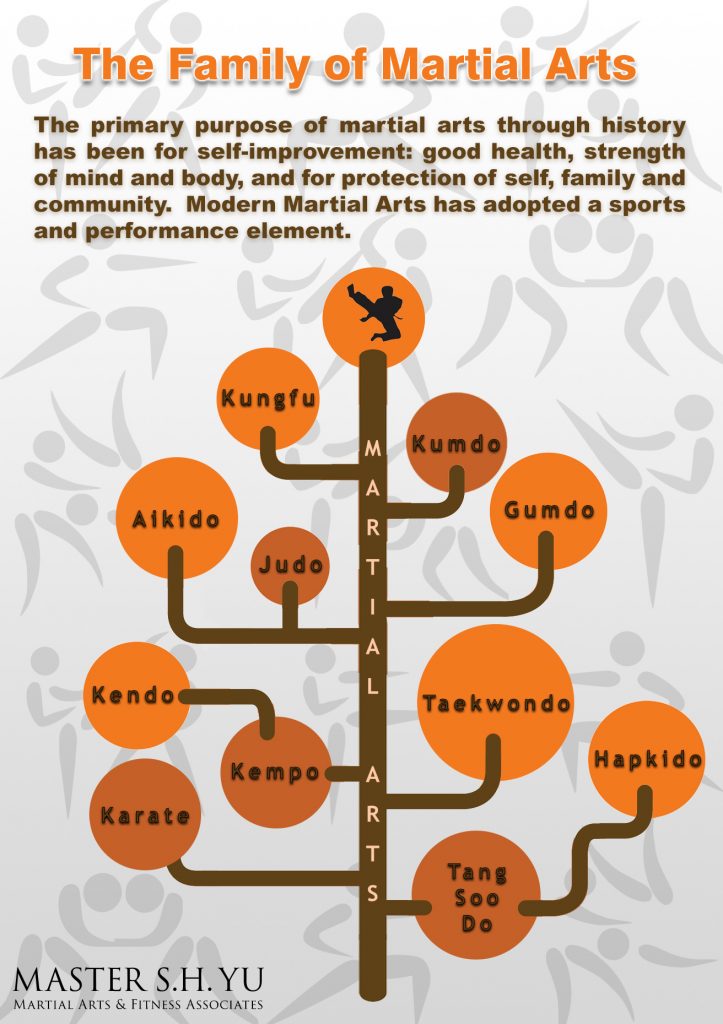 Kung Fu is actually a “catch-all” Western term for Chinese martial arts, according to Black Belt Magazine. Chinese martial arts date back to 2600 B.C. but the Kung Fu we’re more familiar with began around 527 A.D. when Ta Mo arrived at the Shaolin Temple and created 18 Buddhist Fists.

The Shaolin style of Kung Fu strengthens muscles, ligaments, and tendons, while Wu Dung manipulates and strengthens the chi, or life force. The northern style features long postures, leg work, kicks, and acrobatics, while the southern style works the arms and has deep, stable stances.

Kung Fu can also be described as having hard (force vs. force) or soft movements, such as turning an attacker’s momentum against them. (yin/yang)

Kumdo (also spelled Gumdo) means “the way of the sword” and is an ancient martial art that originated in Korea. It dates back over 2,000 years to the time of the 3 Kingdoms of Ancient Korea. According to the World Haidong Gumdo Association, in the 18th century, real swords were exchanged for bamboo swords, and practitioners began wearing protective equipment.

This made the art safer to practice without compromising its focus on spiritual and mental prowess. Kumdo classes include breathing and stretching exercises, sparring, sword forms using practice blades, sword theory, and etiquette.

Gumdo was almost lost to the world during the Yi/Chosun Dynasty (1392-1907) as the government modernized weapons for national defense. The 1910 Japanese invasion of Korea led to a banishment of Korean culture and Gumdo was replaced by Kendo, although masters taught others in secret. After the liberation of Korea in 1945, masters were free to teach again. According to the World Haidong Gumdo Association, the basic techniques include fencing, cutting, thrusting, combat, and abdominal breathing exercises. It’s one of the fastest growing martial arts in the world.

Aikido is the “baby” of the martial arts family. The Aikido Association of America says it’s a Japanese martial art developed in the early 20th century by Morihei Ueshiba and is one of the most widely practiced ones in the world. O-Sensei (“venerable teacher”) created a system of throwing, joint locking, striking, and pinning techniques that were combined with training in Japanese weapons like swords, staffs, and knives.

He wanted Aikido to be not only a way to defeat an enemy, but a way to promote a warrior’s character and self-development. “Progress comes to those who train and train,” says a quote attributed to him on the Aikido Association’s website. “Reliance on secret techniques will get you nowhere.”

Judo is only slightly older than Aikido; the International Judo Federation says it was developed by Jigoro Kano as a method of physical, intellectual, and moral education in May, 1882. He wanted a way to defend himself, but after studying jujutsu, realized that it focused more on a strong body and not the spirit or education.

He removed dangerous jujutsu techniques, improved falling methods, decreed that fighters must grab each other and opened his first studio to teach his new methods. Judo techniques are divided into throws (nage waza), controls (katame waza), and kicks (atemi waza). Atemi waza is not allowed in competition. Judo became an Olympic sport in 1964.

Kendo, also known as “the Way of the Sword”, is the traditional style of Japanese fencing. It’s based on traditional swordsmanship and is considered an offspring of Jensutsu, the classic Japanese sword art. It’s a mentally and physically challenging sport that uses strikes from the edge and tip of the sword, or shinai. Kendo.com says that practitioners, called kendoka (“one who practices kendo”) or kenshi (“swordsman”), wear traditional Japanese clothing and armor (bogu) and use one or two bamboo swords.

Kempo, often spelled as kenpo, describe the same martial art. “Kempo” is the more traditional spelling and “kenpo” is the contemporary spelling. Its history is as confusing as the spelling of its name. While some kempo association sites speak about techniques being passed down through a family, others mention Bodhidharma instructing monks at the Shaolin temple to restore their physical health and train them to defend the temple. What all the stories agree on is that kempo has its roots in both Japanese and Chinese martial arts. Kenpo karate is the oldest style taught in the U.S. and was created in 1949 by William K.S. Chow and taught by his student, Ed Parker.

Tae Kwon Do is another martial art that traces its origins through Korea’s 5,000 year history. An article by the Kukkiwon World Tae Kwon Do Headquarters, breaks down the name to mean tae (“foot” or “to step”), kwon (“fist” or “fight”), and do (“way” or “discipline”). It can mean “to put fists under control”, or as the article puts it, “the right way of using all parts of the body to stop fights and help build a better and more peaceful world.”

It began as a way of training the body and mind in the Koguryo kingdom and was used to train leaders during the Shilla period. Tae Kwon Do teaches punches, kicks, and blocks and uses the blocks and punches together in patterns of movement called forms, or poomse.

Hapkido is another Korean martial art and uses the same three Chinese characters as Aikido, but the similarities between the two end there. Black Belt Magazine says that Choi Yong-sul is widely regarded as the founder of Hapkido, but the credit more likely belongs to a group including Ji Han-jae, Kim Moo-hong, Suh Bok-sub, and Sr. GrandMaster Yu’s Teacher, the late Supreme GrandMaster Myung Jae-nam.

It originally focused on pressure point strikes, joint locks, and throws, but now includes highly refined kicks and hand strikes. Weapon usage is also taught, including canes, staffs, and belts. It’s usually considered a form of self-defense rather than a martial sport.

The word “karate” was first used in 1722 by Sakugawa, a martial artist from Okinawa who created what he called “karate-no-sakugawa”, according to a history of the martial art by Black Belt Magazine. “Kara” referred to China at the time, so “karate” initially meant “Chinese hand” or “Tang” (pronounced “tong”) Hand”, after the Tang Dynasty.

When karate moved to Japan, the meaning of “kara” changed to “empty”, so that’s why the modern definition of “karate” is “empty hand”. Practitioners seek to develop defensive and counterattacking moves, while the mental and moral aspects help the individual spiritually.

Tang Soo Do first appeared during the Three Kingdom Era (57 BC- 935 AD) in Korea as Hwa Rang Do. It’s also been known as Hwa Rang Do, Moo Sul, Kyuck Too Ki, Soo Bahk Ki, Soo Byuck Ki, and Taek Kyun over the years, according to the World Tang Soo Do Association. The ferocious kicks made ancient practitioners feared warriors, comparable to modern Navy SEALS or Army Rangers.

Modern Tang Soo Do also emphasizes defending and countering, along with kicking and blocking. Chuck Norris is a 9th Dan GrandMaster in Tang Soo Do. He began studying the martial art after a Judo injury after only two weeks of training. He founded the National Tang Soo Do Congress.

Sr. GrandMaster Yu is a 9th Dan, internationally recognized GrandMaster who continues the legacy of true martial arts handed down to him from his teachers.   We invite you to be a part of this great martial arts lineage at our Martial Arts Dojhang in Oak Park, IL.

We are affiliated with several international martial arts organizations including the Kukkiwon World Tae Kwon Do Headquarters, the International Hapkido Federation, and the World Haidong Gumdo Federation.

True Practitioners of the martial arts are physically and mentally strong. Staying fit with endurance building…

Get your BlackBelt: What is the Easiest Martial Art to Pursue?

Earning a black belt is a commendable achievement for anyone, and particularly for those of…